Lisa Fauci, PhD Math '86 and professor of mathematics at Tulane University, was chosen to deliver the 2016 Kovalevsky Lecture "for her pioneering contributions to mathematical and computational modeling of aquatic locomotion, microorganism motility and fluid dynamics of human reproduction." 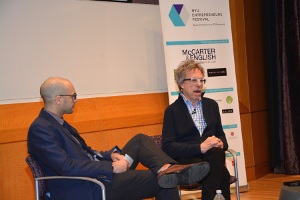 Guy Story, MS Computer Science '80, in his keynote talk with Josh Brunstein of Bloomberg Businessweek at the Fifth Annual NYU Entrepreneurs Festival. Story, who was founding CTO of Audible, Inc. and is now General Manager for Automotive, Alexa Voice Services, has primary responsibility for bringing Alexa, the voice service that powers Amazon Echo and other devices, to the automotive sector.

Mikael Rechtsman, a Courant Instructor from 2008 to 2010, has been awarded the Alfred P. Sloan Research Fellowship in Physics. Now an assistant professor of Physics at Penn State University, Rechtsman's research seeks to understand photonics, the science of light. For more information, see the news release from Penn State University.

When a Man Loves a Supercomputer

In the Spring 2016 issue of the NYU Alumni Magazine (p.13), Emeritus Professor Peter Lax (Ph.D., 1949) recounts the events of May 1970, when a group of students took over Warren Weaver Hall and the institute's prized CDC 6600 supercomputer. It has been an eventful year for Professor Nirenberg, a Courant alumnus (MS, PhD '47) as well as a distinguished member of the faculty. The Institute celebrated his 90th birthday (a few months early) at a reception on October 17, 2014. We were pleased to be joined for the occasion by many of Louis' mathematical friends.

We were then thrilled to learn on March 25 that Professor Nirenberg was named a 2015 Abel Prize winner with John F. Nash, Jr. of Princeton. The Norwegian Academy of Sciences & Letters, which confers the prize, cited Professors Nirenberg and Nash “for striking and seminal contributions to the theory of nonlinear partial differential equations and its applications to geometric analysis.” The Institute celebrated with a reception on Monday, March 30. Colleagues, former students and friends offering their congratulations, anecdotes, and fond feelings for Professor Nirenberg included Institute Director Gerard Ben Arous who flew in from Paris, where he has been on sabbatical, Acting Director Mike Shelley, Mr. Martin Fossum of the Norwegian Consul’s office in New York, Bob Kohn, Jalal Shatah, former Nirenberg student Sergiu Klainerman, Peter Lax, Charles Fefferman and NYU President John Sexton. The annual Holiday Lecture was given in December by Brittany Shields (GSAS ’08), presenting “The Courant Institute of Mathematical Sciences: A Historical Perspective, 1934-1972”. At the time of the lecture a doctoral candidate at the University of Pennsylvania, Ms. Shields has written and presented extensively about the Courant Institute and Mathematics at NYU, including her master’s thesis: “A Sociological and Historical Study of the Early Development of New York University's Courant Institute of Mathematical Sciences”. She spoke more recently on Richard Courant and NYU’s mathematics enterprise during World War II at the American Mathematical Society Spring Eastern Sectional Meeting on March 8 in Washington, DC.

Professor emeritus Peter Lax (PhD ’49) is the subject of a new biography written by Reuben Hersh (PhD ’60) and published by the American Mathematical Society. Peter Lax, Mathematician: An Illustrated Memoir, which appeared in early 2015, covers the Abel Prize winning mathematician’s life from his early life in pre-World War II Hungary to the present. In an engaging volume of text and pictures, Hersh devotes chapters to Lax’s youth in Budapest, his involvement in the atomic bomb project, students and colleagues in the Courant Institute, the momentous late-1960’s, and descriptions of Lax’s mathematical achievements. An ample section of Appendices includes a profile of Lax’s late wife, the mathematician Anneli Cahn Lax, Lax’s own writings on John Von Neumann and Richard Courant, and writings about and by Lax’s late son John. Lax’s C.V., bibliography, a list of academic “offspring” and numerous photographs of family and colleagues complete the picture. Peter Duren (U. Mich) called the book “…well researched and full of interesting facts, yet light-hearted and lively” and Courant’s own Gérard Ben Arous commented “This book brings out both the personal and professional aspects of Peter's work in a captivating manner. It is a great read for people who know Peter as well as for those who do not."

Reuben Hersh has written and co-written numerous popularly-received books on mathematics for general and specialist audiences, including his and Philip Davis’ National Book Award-winning The Mathematical Experience. He is professor of mathematics, emeritus at the University of New Mexico.

Professors Lax and Hersh will be in the Warren Weaver Hall 13th Floor Lounge for a book signing on Thursday, April 23 at 4 pm.

Mathematical Sciences Alumna and Husband Together as Courant Math Faculty Courant Assistant Professor of Mathematics Miranda Holmes-Cerfon (PhD ’10) and Assistant Professor Antoine Cerfon both received 2014 Early Career Research Program awards from the Department of Energy. They were featured as the June 14, 2014 cover story of Advance Scientific Computing Research (ASCR)’s newsletter “At the Universities”. The story covered the interrelationship between Holmes-Cerfon’s work on molecular self-assembly and Cerfon’s work on temperature control of hot plasmas during sustained nuclear fusion, and how “the two have influenced each other toward energy-related research.” Holmes-Cerfon earned her PhD in Courant’s Center for Atmosphere and Ocean Science, which she followed with post-doctoral work at Harvard. She joined the Courant faculty in 2013 after serving as a Courant Instructor in 2012. Antoine, who earned his PhD in Applied Plasma Physics at MIT, joined the Institute in 2012.

Barbara Wohlmuth (CIMS Postdoc, 1997-98) received a 2012 Leibniz Prize "for her research achievements in numerical analysis, which enable direct applications in scientific and engineering computing."  A ceremony will be held for this year's  eleven winners in February 2012 in Berlin.  The full press release is available from the German Research Foundation.

Barry F. Smith (Ph.D. in Mathematics, '90) has received a 2011 DOE Ernest Orlando Lawrence award, along with eight other winners.  The award honors Smith and co-winner Lois Curfman McInnes "for scientific leadership in advancing the innovative and transformative numerical software package PETSc, which provides robust, efficient, scalable, and extensible tools that are the backbone of numerous high-performance DOE simulation computer codes."  The full press release is available from the Department of Energy.

In "Business Renewal through IT" Joe Eng (M.S. in CS '90) discusses the transformation of JetBlue's IT function.  The video is available at booz & co.

Research by John Rinzel (Ph.D., Math Courant '73; Professor, NYU Center for Neural Science and the Courant Institute of Mathematical Sciences) and other NYU researchers have identified "a mechanism the brain uses to help processes sound localization."  The full article is available from physorg.com.

Edward Belbruno (Ph.D. '79 Math) discusses his work and paintings at the National Arts Club presentation "Moon, Microwaves, and the Art of Edward Belbruno."  The talk, followed by a reception, is being held on Wednesday, January 12, 2010 at 8:00PM.  Full details can be found here.

Brian J. McCartin (Ph.D. Math '82) received the Chauvenet Prize, "the highest award for mathematical expository writing that’s been described as the Pulitzer of the math world," for  “e: The Master of All."  The full story is available from Mlive.